Join us for the 2022-2023 Season and buy your season ticket now!
Volunteers needed for our board.  Donations appreciated. 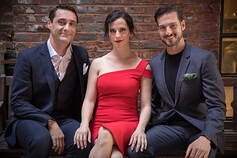 Several years ago, three musicians from the far corners of the world moved to New York City with the common goal of pursuing their dreams of becoming world class performing musicians. When these three musicians met in New York City in 2012 a musical explosion occurred resulting in the creation of Empire Trio (formerly known as O Sole Trio), an exhilarating and uniquely talented classical crossover ensemble, that has been taking concert halls by storm all over the world. Empire Trio quickly established themselves as a musical force, selling out major venues all over  the United States, Canada, and the UK. O Sole Trio features the lush and mesmerizing voices of soprano Erin Shields, and baritone Michael Kelly, as well as the versatile and virtuosic David Shenton on piano and violin, the world’s first (and possibly only) musician to play violin and piano simultaneously.
https://www.liveonstage.biz/hooray-for-hollywood-ft-empire-trio-1 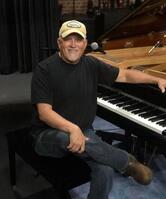 Jeff Little is an award winning musician from the Blue Ridge Mountains of North Carolina. With few exceptions, the piano does not play a prominent part in Appalachian music, and is rarely the lead instrument. But Jeff Little is an exception – and a remarkable one. Jeff has not only been recognized as a critically acclaimed musician but an innovator in acoustic music. Jeff travels the country performing concerts with an energy and dedication to his music that is evident at every show. Performances include The Smithsonian Institution, The National Folk Festival, American Piano Masters, Merlefest, and many festivals, performing arts centers and music venues throughout the US. Jeff has been featured on NPR and PBS many times and has also taken his music around the world. In 2014 Jeff was inducted into the Blue Ridge Music Hall of Fame.
“Jeff Little never fails to convey his love for his region’s music and his love of performing it. The keys of his piano evoke old-time fiddle tunes, traditional blues, country classics, and folk. His energy is infectious: clapping hands, patting feet, and sold-out rooms are typical fare for Jeff Little.”  Mountain Home Music  https://www.jefflittle.net/home.html 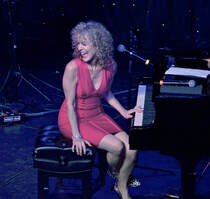 SWINGING PIANO, SULTRY VOCALS, SASSY HUMOR!
Grammy nominated pianist/singer/songwriter/radio host, Judy Carmichael is one of the world’s leading interpreters of stride and swing piano. Count Basie nicknamed her “Stride” acknowledging the command with which she plays this technically and physically demanding jazz piano style. America’s Jazz Times Magazine says: “Judy Carmichael exhibits a truly remarkable ability to blend two of the all-time finest, most intuitive jazz singers, Peggy Lee and Annie Ross. Carmichael has played the major concert halls and festivals around the world to programs with Melissa Etheridge, Leslie Garrett, Joel Grey, Michael Feinstein, Steve Ross and the Smothers Brothers. In addition, Ms. Carmichael has done comic skits and performed her music on radio and TV and performed private recitals. 2022 marks the 22nd anniversary of Judy Carmichael’s Jazz Inspired, the popular NPR show and Podcast, which Ms. Carmichael produces and hosts. Her book celebrating this anniversary, Great Inspirations: 22 Years of Jazz Inspired on NPR, will be published in fall 2022.She has written two books on stride piano and numerous articles on the subject of jazz. Her memoir, Swinger! A Jazz Girl’s Adventures from Hollywood To Harlem was published in January 2018. Her recordings and music books are available at www.judycarmichael.com and iTunes. Judy Carmichael’s Jazz Inspired podcasts on all the usual platforms and streams from www.jazzinspired.com
https://www.liveonstage.biz/judy-carmichael
Previous concerts this season 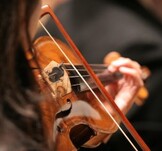 *Promotions and selections made through Live on Stage